Backstreet Boys are one of the best-selling musical acts in history, and when the long-running quintet topped the Billboard charts earlier this year with DNA, their ninth studio album, they joined an elite group of artists who’ve hit number one in three separate decades. As such, it seems only fitting that the group has embarked on their most expansive arena trek in 18 years, the DNA World Tour.

For its North American leg, which ran from mid-July through mid-September, the tour carried an audio package from Escondido, CA’s Sound Image that included an expansive E-Series audio system from Adamson Systems Engineering.

“My relationship with Adamson goes back a long way,” says front of house engineer James McCullagh. “I’ve always been a huge fan of their ‘mid-forward’ sound. It’s not something you can EQ into a PA; it’s just the way their drivers handle that frequency range and it’s especially great for vocals and guitars, so it was the most logical choice for a vocal harmony pop group. We get a really big sound.”

Sound Image systems engineer Cam Whaley says the biggest challenge with the audio system design was incorporating the sizeable PA within a complex set. Specific obstacles included a large, diamond-shaped thrust in front of the stage with a large audience area in its center and an automated video wall that descends in front of that thrust at one point in the show. The solution was to go wider with the main arrays at a slightly tilted angle while incorporating larger side hangs that cover the audience to the sides of the thrust to minimize the necessity for front fills. 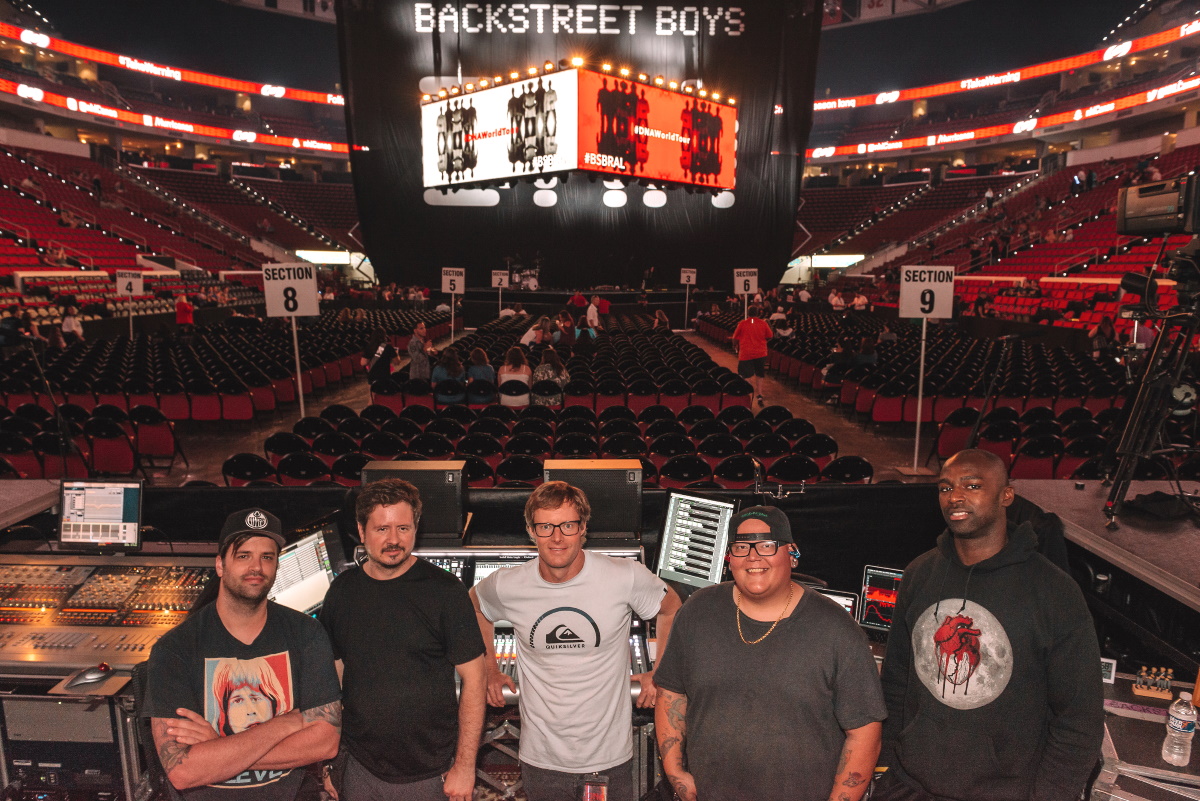 As such, the main left-right arrays are comprised of 18 Adamson E15 three-way, true line source enclosures per side while the slightly smaller side hangs have 12 E15s atop six E12 three-way, full-range boxes per side. Low end comes courtesy of 12 E219 subwoofers ground-stacked on each side of the stage. The design also incorporates rear hangs of a dozen S10 sub-compact two-way, full-range cabinets per side, and a complement of S10ns – the narrow-dispersion version of the S10 – and smaller IS7p point-source enclosures cover the VIP ticket-holders in the middle of the thrust.

Whaley is leaning heavily on Adamson’s Blueprint AV design and simulation software to ensure the best possible coverage from show to show, as was also the case in the initial design period.

“Blueprint is critical to me in the design phase,” he stresses. “I know I can count on the results even when doing something unconventional, and I know that when I model something and tell the promoter which seats we can cover, it will be accurate to the row.” That’s been especially valuable on the trek since many of the dates sold out, leaving promoters hungry to open up additional blocks of tickets.

Speaking generally about the Adamson system, Whaley says its overall sonic performance is ideal for a vocal-heavy pop group like BSB.

“The mid 7-inch Kevlar drivers in the E15 and E12 are really incredible,” he enthuses. “That midrange quality really makes it easy for the engineer to bring the vocals forward without sacrificing the rest of the mix, and the impact and tightness of the E219 make it easy to achieve that big pop feel and sound that’s exciting without being overwhelming or loose.”

After its successful North American run, the DNA World Tour will resume in mid-October for a string of dates in Asia before culminating with four nights in Honolulu, Hawaii.

The worldwide success of their DNA album and the extensive routing and excellent reception for the world tour supporting it make it clear that, well into the third decade of their career, Backstreet is back in a big way.