Season after season, through the ongoing upgrade and refinement of its installed live sound technologies, the 18,000-seat Hollywood Bowl has long ensured that concertgoers enjoy a premium experience at the historic outdoor venue. This year, with one eye on current production demands and another on the next step in the venue’s evolution, the Hollywood Bowl has installed a new pair of DiGiCo SD7 Quantum digital mixing consoles outfitted with 32-bit Ultimate “Stadius” mic preamps.

“We aspire to do more object-based mixing, and to have the flexibility of many more inputs and many more outputs, distributing them as needed,” says Fred Vogler, principal sound designer and mixer for the Los Angeles Philharmonic, which anchors the Hollywood Bowl’s summer season. “Looking at our options, we thought that taking the Quantum leap, so to speak, was the most logical and best direction for us.” 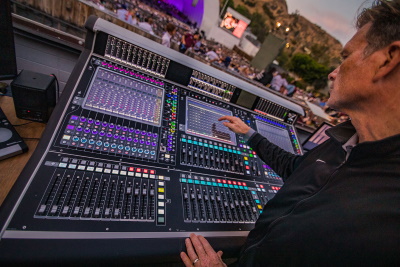 Five years ago, the venue purchased a pair of DiGiCo SD7 digital mixing consoles—one for front of house and one for monitors—which enabled production staff to operate the installed PA system at 96kHz resolution for the first time. But productions have started to put pressure on the venue’s resources in recent years, while concert sound loudspeaker systems have evolved to offer immersive capabilities, so the audio team decided they could use some more horsepower to meet current demands and prepare for the future.

“It’s hard to believe,” Vogler continues, “but we were maxing out. We were coming to shows where we didn’t have enough groups or the number of auxes that we were looking for. It seems like we always need another x number of inputs for a guest band or some other feature. This console upgrade was a way to solve that by doubling everything.”

Vogler reports that the upgrade has also had a noticeable effect on the sound quality in the venue. “We went with the new preamp cards, so we also increased the quality of the conversion, the analog mic pre-to-digital sound. That has been a winner for us. You can hear an improvement in the soundstage.” 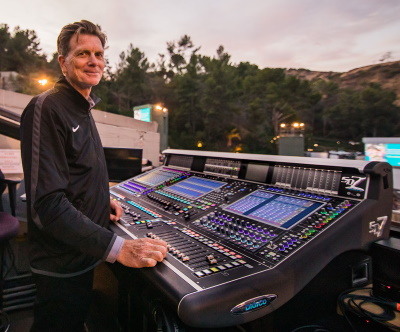 While the new Quantum desks support much more processing on each channel, expediency is the watchword at the Hollywood Bowl. “Most of the time we have to move pretty quickly,” Vogler explains. “We have a rehearsal, a concert; a rehearsal, a concert; day after day. Our goal is to get up and running and establish a mix as fast as possible. I understand that the Waves plugins work quicker, better, and more reliably, but it hasn’t made a difference for me; I think my favorite filter is the high-pass filter.”

That said, he is looking forward to trying out some of the new features and functionality when time allows. “One of the things that I’ve always enjoyed about DiGiCo is that it seems that it always has something else to teach me or to allow me to investigate. At the moment, we don’t have time to go through and play with all these features, but I look forward to checking them out at some point.”

Vogler has had a chance to try the expanded connectivity, however. “We have used the MADI ins and outs for recording and playback. One of the things we really like about the DiGiCo platform is the MADI interface, and it seems like we have more than ever with these new surfaces.”

As for his overall impression of the SD7 Quantum, Vogler says, “There’s a feel to it; it’s fast, like a new car. The speed with which it turns on and off and restarts and is ready to go is noticeably faster. It just boots up and goes. I think that if you are new to DiGiCo you’ll be turned on by how fast and capable this mix platform is. If you’ve been using DiGiCo all along, you’ll be tickled that it moves that much faster and seems to be that much cleaner and more open sounding. Quantum brings a pretty significant increase in performance, and we’re thrilled to be able to have it here at the Bowl.”