Leeds Castle in Kent recently played host to the open-air Leeds Castle Classical Summer Concert in celebration of its 900-year milestone. This gave around 11,000 concert-goers the opportunity to witness the world premiere of the fanfare, A Tribute to Leeds Castle, composed by Tom Hodge, performed by the Band of the Royal Marines and the Royal Philharmonic Orchestra, and conducted by John Rigby.

Set in this picturesque location, with its natural amphitheatre and the castle as the backdrop, the visitor experience of this setting was augmented by the clarity, coherence and even distribution of the sound, delivered by the advanced Martin Audio Wavefront Precision Longbow (WPL). This was supplied, optimized and controlled by RG Jones Sound Engineering. 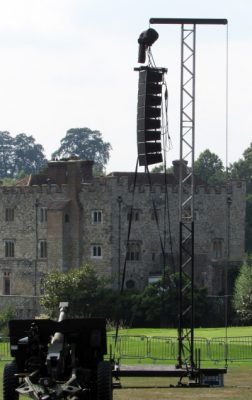 Working for concert organizers Heritage Events, the sound production company, under project manager and front of house engineer Ben Milton, had to contend with a site that was both deep and wide (590 x 656-feet), with a steep incline. But he knew the WPL would mitigate many of the idiosyncrasies and even out the 180° sound dispersion required to cover the audience area.

Programming the optimization for depth in the dedicated DISPLAY software, Milton says, “We produced a very even tone, deploying a system optimization at 3dB drop between the auditorium boundary and the downstage edge. This produced a totally even coverage throughout.”

To achieve this, they deployed 16 WPL elements per side for the main hangs, with eight Wavefront Precision Compact (WPC) for the outfills, 12 WPL for the Hill Fill (the single auditorium right delay position) and four-a-side Wavefront Precision Mini (WPM) for the infills. In addition, four tiny Martin Audio DD6s were spread across the front for near-fill coverage and six-a-side Martin Audio SXH218 subwoofers provided low-end extension in a non-cardioid configuration.

RG Jones director Andrew Williamson says, “Having worked for many years on the Leeds Castle site, as soon as we heard the WPL at demonstration we knew it would be perfect for this event.” 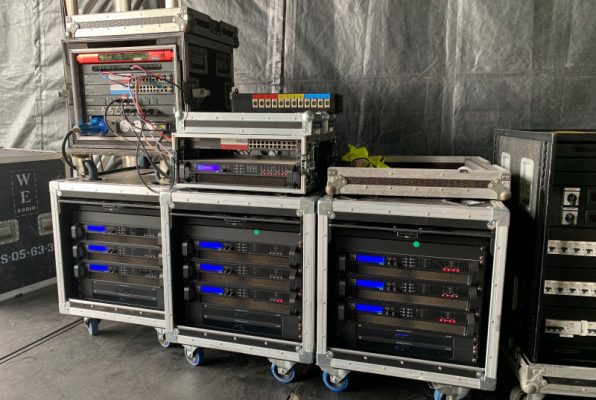 In summary, Milton states, “The PA system sounded fantastic. WPL is every bit as accurate as its big brother, the MLA. I thought the low end and mids were particularly coherent and offered even greater headroom.”

Event director Richard Millward adds, “I have had the privilege of working with RG Jones for many years and there was certainly an appreciable difference to the quality of the sound reproduction this year; this was noticeable across the site, which is a difficult thing to achieve. We have been working together with RG Jones on this event for many years—long may that continue, with their WPL.”