Bozonelos chooses both his words and his tools carefully, and he has plenty of good things to say about the Focusrite Clarett 8PreX Thunderbolt and Scarlett 2i2 interfaces that are at the core of the college’s audio teaching mirror-image studio facilities at its Menifee Valley Campus and San Jacinto Campus in Riverside County, California.

“We have three courses, from an introductory course to a full Pro Tools course, that really give students a firm grounding in the principles and practices of pro audio, and Focusrite products are part of that from start to finish,” he says. 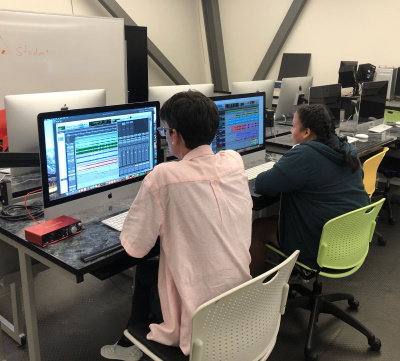 “The Scarlett 2i2 basic interfaces, of which we have over 50 between the two campuses, get students onto the digital highway immediately and simply, because they’re so user friendly. Beyond that, Focusrite Clarett 8PreX Thunderbolt interfaces are connected with Slate Media Technology Raven consoles in each campus’s teaching studio. In fact, these Thunderbolt interfaces were our introduction to using Dante as our audio-over-IP interface, and the students are exposed to them from the beginning.”

That’s critical, Bozonelos continues, because Focusrite and Dante form so much of the infrastructure of the pro audio industry that his graduates will become part of. “They move into the industry already familiar with the tools they’ll be using professionally for years to come,” he says.

But as importantly, he says they can already hear the difference in audio quality when it comes to the Scarlett and Clarett interfaces. “The sound is fantastic — clear and transparent — and the students can discern that,” he says. “They’re also a very stable technology — they provide teachers with what we like to call a ‘positive learning outcome.’ You can’t ask for more than that.”

Audio-Technica Celebrates 25th Anniversary Of AT4050